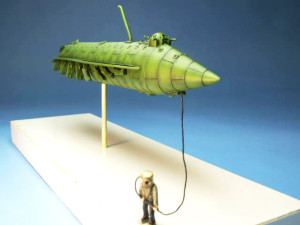 72-003. Alligator. 1/72nd Scale.
Originally powered by 16 paddles along her hull, the Alligator was launched in May 1862. Sent to the base at City Point, all tasks considered for Alligator — clearing obstacles, blowing up enemy bridges — were deemed too risky due to her deep draft.  She was subsequently sent back to the Washington Navy Yard for more testing.  In July the paddles were replaced with a screw propeller which her crew operated by hand crank. Sent south to to aid in the attempt to take Charleston Harbor, Alligator sank in heavy weather while under tow.

Approximately 8.1/2″ long overall. Includes diver figure, resin and white metal parts to complete the model in either the early version with the oars, or the later version with the propeller. This is an incredibly easy kit to build, and probably a good one for those with limited experience building resin kits, or even “First-Timers.”

International Customers, please check our
Your Order page before checking out.

RSS Feed for this Site